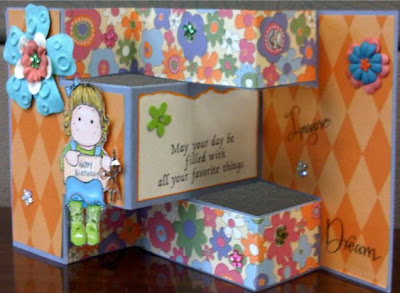 I joined a card swap on LuckyBug Yahoo Group that forced me to learn a new technique in card making. This card is called atri-fold shutter card and I know someone has a blog with a tutorial, but I'm on my work computer right now (shh, don't tell) and don't have that link for you. I'll get it and post another tri-fold card with it.
Meanwhile, I am such a Paperholic that I decided to use my scraps for this swap. That means that I don't have enough of one pattern to make the same card twice! So all my tri-fold cards are different. This one is sporting Tilda with a Tag, and I made it into a birthday card. Each card I make has a few more embellishments than the last one, and this was the second card I made.
It's easier to cut and fold the card than it is to create the design! That's one perk about making the same card several times, I guess. But my drawers are OVERFLOWING with leftover pieces of paper!! I've got to do something, and this is a start.
Posted by Pat at 10:10 AM