Meet  Honey, our new rescue. She's 7 years old and is (we think) a Morkie, a mix between a Maltese and a Yorkie) 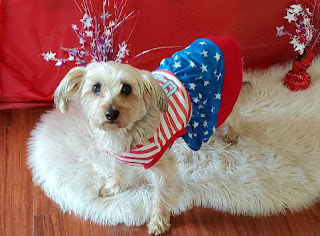 And so, here is the last page of my booklet, Wilson's Adventures across  the Rainbow Bridge: 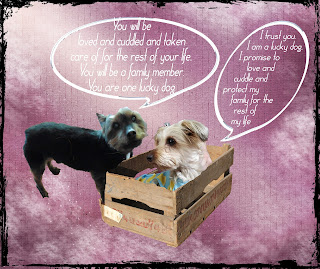 Wilson will continue to have many adventures across The Rainbow Bridge, with Papa, other family  members, and his friends, both animal and human. We will always miss him and his love and support
with which he blessed us. Our grief continues. We truly believe that Wilson paw-picked Honey for us, knowing that she would help heal our hearts and fill the void that his passing left in us. In many ways, Honey is like Wilson, but she is her own dog, with her own personality and her own attitude. She is a joy to snuggle and hold, and a reminder that everything living thing needs love and support, a family and a home.
She is family, and she’s home now. Thank you, Wilson & the Buddy Foundation 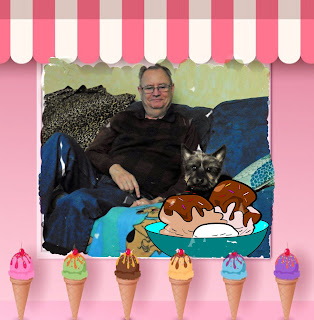 One sunny day, Wilson and Papa went to the beach. They were relaxing’ under the sun, wearing matching Speedos. Wilson slurped up a Bark-arita while Papa enjoyed a fruity Mai Tai.

The sun was very hot. To cool off, Papa rented a surfboard and he and Wilson swam out to catch the next big wave. It was huge! Here they come, Papa hanging ten towards the back while Wilson demonstrates perfect balance, hanging four.

They only wiped out four times…but who’s counting? 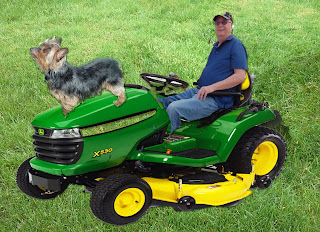 Papa finally got his dream – a riding lawnmower. Heaven is filled with lush fields of freshly-cut grass, thanks to Papa. Wilson always sat in front on top of the engine, helping him steer and barking every time they made a turn to mow more grass.

Taking a break was refreshing for both. While Papa sipped beer and soaked up the sun, Wilson had his very own patch of dandelions to frolic in, spreading their tiny white seeds all over Heaven (more grass to be mown)… 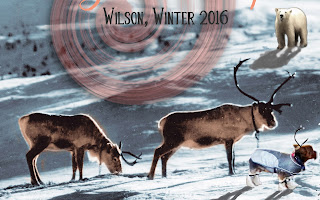 Wilson always considered himself the Alpha male. When he decided to take a vacation to the Arctic Circle, he noticed a couple of reindeer while checking out the local wildlife. The reindeer had lost their way back to Santa’s village. Knowing that the fate of Christmas lay in his tiny paws, he strapped on a pair of antlers and led them safely back to the North Pole.

Santa was so proud of him. He fed him, made sure he was warm and cozy, and happily dropped Wilson off at Heaven’s door. Santa thanked him and assured him that he would be at the top of his Nice List forever! 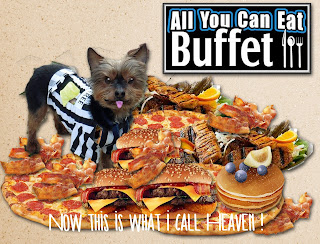 When it comes to food, Wilson was no slouch. He could really pack it in and still want more. He was thrilled to discover the ALL-YOU-CAN-EAT Buffet.

When he entered the restaurant, his eyes almost popped out of his head. No wait, no charge, and no limits as to what and how much he could eat. He piled on the pancakes, crunched up bacon, chewed on T-Bone steaks, and swallowed pizza slices whole. By the end of the day, his tummy was swollen as he waddled out of the restaurant with a chicken leg in each paw. 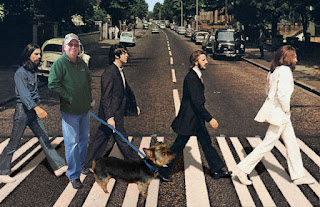 Wilson was ready for another road trip. So Papa gassed up his white Cadillac and Wilson sat in the passenger seat, paws against the window, tongue hanging out, trying to bite any car that dared to pass them. They both had their shades on; one of Papa’s CDs was playing and the two of them were jamming along to the Beatles.

Papa suddenly took a sharp right and drove a long time. Soon, they were parked next to Abbey Lane. They both got out of the car, stretching their legs before taking a walk (with the Fab Four) across the famous landmark… 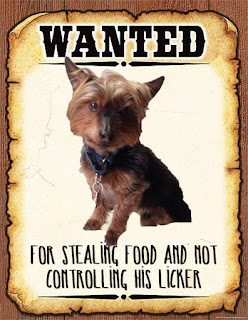 Wilson was as sneaky as a ferret. He could steal a sandwich right out of your hand without warning. To get out of trouble, he would look at his victim with big, sad puppy eyes and lick the person’s face.

Actually, he would lick any part of your body if you let him. He just could not control his licker, which led to his being on Heaven’s Most Wanted List. .

Those big sad puppy eyes work in his favor, though. No one would turn him in. Look at that face. Aww, so cute…

These are only a few of the stories that healed me and my daughter. I hope you enjoyed reading them.

It's been 2 months since my daughter and I lost our Silkie Terrier, Wilson. Wilson became a valued member of our family and an emotional support dog when my husband passed away. In order to work through my grief, I began writing mini-stories of Wilson, some of them with my husband, his Papa. I used Photoshop to match some of the photos of them with the stories. Here's a couple of the stories that helped me through the whole his (their) passing created in my heart.

WILSON’S ADVENTURES ACROSS THE RAINBOW BRIDGE

Ever wonder what your dog is up to now that he has crossed the Rainbow Bridge? As you know, all dogs go to heaven, so although he misses you, he is having an awesome time, doing (and eating) the things he couldn’t here on earth. Here are some of the adventures our dog, Wilson, is doing since crossing the Rainbow Bridge. The following stories are dedicated to him and to his Papa…

One day, Wilson chased down the Weiner Mobile, jumped in and rendered the driver senseless by licking him until he fell out of the truck. Buckling his seat belt, Wilson drove off with his Papa in the navigator’s seat.

After a nice long ride, they parked and had a picnic, eating all the hotdogs they could until the Angel Police caught up to them. After sharing their hotdogs with the kindly officer, they received a warning to never again steal another vehicle again…

…which foiled their plans to capture an ice cream truck the next time it would drive past them. But a promise is a promise. 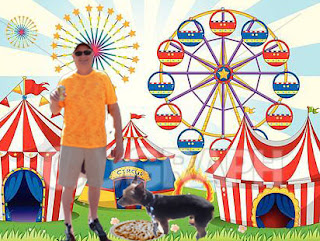 One weekend, Wilson and his Papa went to the carnival. It was so much fun! There were rides and music and games and lots of yummy smells.

While Papa enjoyed talking to people he knew, Wilson enjoyed all the delicious “leftovers” that children dropped on the ground in their excitement. He especially liked the fallen chunks of Funnel Cake, but he also sniffed out popcorn and pretzels and sometimes a stray bit of hotdog!

When they got thirsty, Papa enjoyed his soda while Wilson jumped for joy when he was given a Puppaccino. It was the perfect way to end the day together. 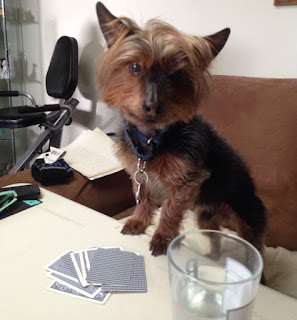 It was a slow day and Wilson was bored. He went looking for Papa, and found him in the middle of a card game. He sat in an empty chair and gave everyone at the table sad puppy eyes. He put his paws on the table as if to say, “Deal me in”. The other players couldn’t resist his request and dealt him in. Little did they know he was a card shark, and those innocent eyes fooled all but Papa, who quit playing the first chance he got.

Good thing, too, because Wilson cleaned all the rest of the players out! And it’s too bad he was only playing for dog treats… 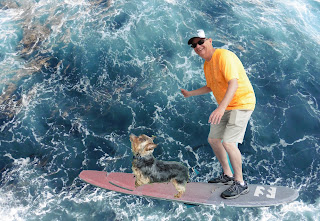 One sunny day, Wilson and Papa went to the beach. They were relaxing under the sun and wearing matching Speedos. Wilson slurped up a Bark-arita while Papa enjoyed a fruity Mai Tai.

The sun was very hot. To cool off, Papa rented a surfboard and he and Wilson swam out to catch the next big wave. It was huge! Here they come, Papa hanging ten towards the back while Wilson demonstrates perfect balance, hanging four.

They only wiped out four times…but who’s counting?