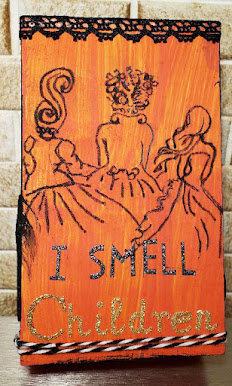 Today I've used one of my 6"x3" wooden blocks (I only have one left).I got this free image, inspired by the Disney movie Hocus Pocus, off of Pinterest and traced it onto my orange acrylic-painted block. During the decluttering I've been doing, I found an old pad of copy paper, the kind that when you press on the paper, it transfers whatever you're writing/drawing in black onto your surface.

Instead of coloring my image, I left it as a silhouette. I used Dollar Store sticker letters to spell out the quote, "I smell children," spoken by one of the characters. Framing my block with black paint along the edges, I added black lace at the top and baker's twine below the quote. A simple project yet eye-catching, especially if you're a Disney fan.

I painted my last wooden block purple, and now I'm trying to think of a good quote or picture for it. Any ideas? While you're thinking,  please enjoy my gruesome giggles offering... 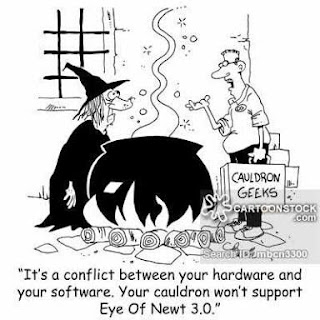 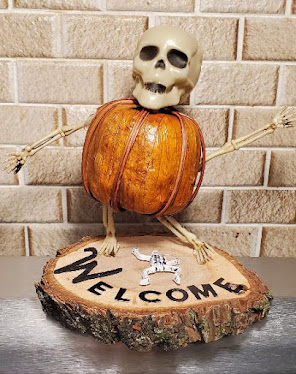 I decided to get inspired by the move Toy Story; first with Mr. Potato Head and his interchangeable parts, and second, with the child who likes to takes his little sister's doll's and other toys and make scary new characters out of them (I think that was in the first movie). I love the Toy Story series of movies.

I have this bin overflowing with Dollar Tree Halloween supplies, so I pulled out a skull, a skeleton and a pumpkin. I love creating 3D art for Halloween, and what goes best at Halloween than skeletons and pumpkins? Pulling off the skeleton's limbs, I stuck them into my (Styrofoam) pumpkin. Next I added the skull. After I glued them all so they stayed on, I realized they were not quite balanced. In fact, he looks like he's either dancing or taking a bow...

...which led me to adhere him onto the wood slice and spell out the word Welcome. If you think the inspiration is a little subtle, I get inspired by so many things, and smells, and music, and memories. It's very difficult to go to a thrift store without coming out with bags and bags of things that inspired me. Is that the way with you? Do you think of a project, and then collect the materials, or do the materials inspire you to create?

Ah, well, here's some gruesome giggles while you're thinking about it... 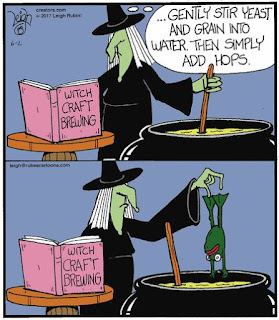 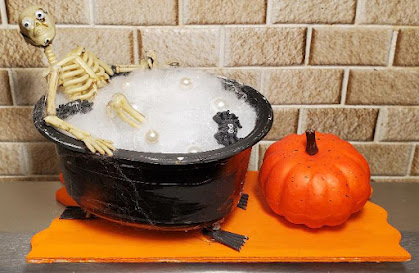 It's time to play with my skeletons again. I would love to decorate a pumpkin just like this, but this year I don't think I'll have the time to work on it. However, I think it turned out wickedly good in miniature. I again used one of the wooden 6"x3" wooden bases, this time painted orange. Can you guess what I used for his bath tub?

I washed and painted a soft cream cheese container (instead of recycling it, I upcycled it).Once the paint was dry, I gently ripped off a couple feet from another skeleton to make it look like a "claw-foot" bath tub. His foamy bubbles are just pieces of spider webbing, topped with pearls for bubbles. My skellie is not squeamish, so he shares his "once-a-year" bath with his pet spiders.

I placed a pumpkin next to the tub. I can't decide whether I want to leave it there or place a greeting. What do you think the caption should read? Privacy please? The water's fine; come on in? Who's there? For now, I'll call this project finished. I can always change it later. 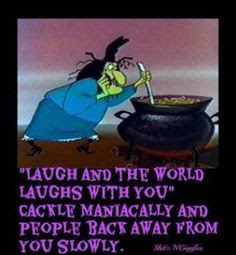 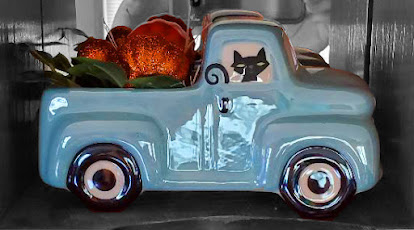 Today I didn't have a lot of time to craft, so I took a ceramic planter shaped like a pick-up truck and removed the summer flowers from the truck's bed. I popped in a few pumpkins and greenery and added this cute cat rub-on in the window. That's it, Less than 5 minutes and my project is complete for today. I think it's cute. I like buying/having things that I can change out for the seasons.

Ready for your daily dose of gruesome giggles? 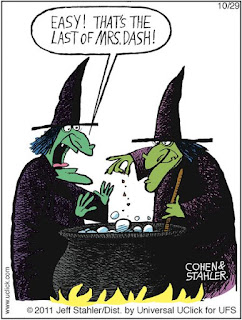 31 Days of Halloween - Too Cute to Spook Halloween Decor 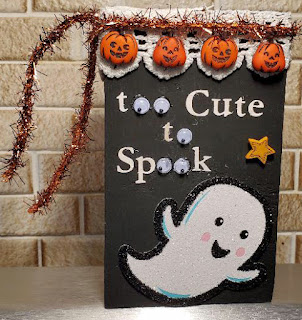 I created more Halloween decor using the wooden blocks I painted black. Today's project  sports a cute ghost sticker. In fact, he's so cute it inspired me to use the phrase :Too Cute to Spook". I had a small piece of lace leftover from a previous project, which I adhered onto the top front of my wood block. After using white glitter stickers for the greeting, I added a star button, but it looked lacking somehow. Did I mention I have a problem with white space? LOL
I dipped into the bag of buttons and came up with a few Jack-o-Lanterns that I glued onto the lace. After riffling through my ribbons and trim, I found this stretchy,  glittery string (?) and tied it around the lace, and now I feel my project is ready to show off. My living room shelf is getting quite crowded with all the Halloween projects I've made so far, and the month isn't even half over! That won't stop me from featuring a Halloween craft for each day of October, though.
I hope you get a chance to craft today! Here's a gruesome giggle to brighten your day... 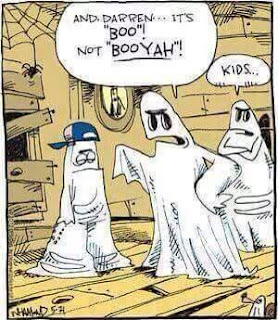 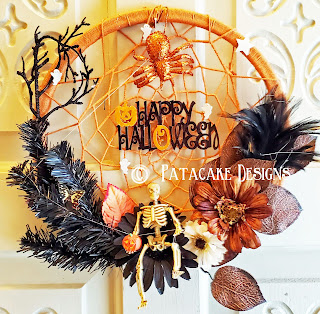 Pulling out another skeleton, I decided to change it up a little and created this door hanging. I spray painted a dream catcher orange after pulling off the beads and feathers from its original state. The bin of Halloween stash supplied me with all kinds of goodies to add to the circle frame and surround my little skeleton.

I found Halloween flowers, Autumn leaves, a couple feathers and some "blackery" (my term for greenery that's not green). Placing my skeleton in a sitting posture, it seemed to me that something was missing...

The design of the string woven through the round frame looked like a spider web, so I popped o an over-sized spider and my door is hauntingly ready for Halloween. Except for the dream catcher, everything else was leftover from Dollar Tree shopping. It's a great store  for holiday DIY! 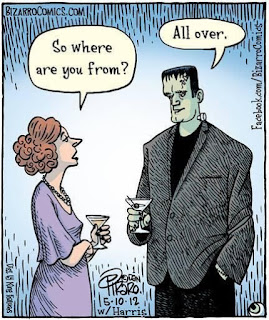 31 Days of Halloween - "Dude, I Got Your Back" Halloween Decor 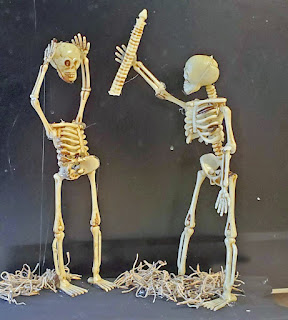 Into the bin of Halloween goodies my hand reached, and out came more skeletons. That's a good thing, because when I worked on my first skeleton montage, I had painted several of the thin black wood pieces from my first skeleton project, so I was ready to glue the skellies onto the base. Again, I ripped the limbs from these little dudes so that I could pose them better.

This time I got my inspiration from a Halloween shirt I bought years ago. It showed 2 skeletons on the front with the words, "I got your back" and 1 skeleton holding the other's spine. I think it looks good in 3D as well as on my shirt. I threw some straw on the base and left room to personalize it if it sells. I started using Facebook Marketplace to sell my art and have had some success.

This piece is sitting next to the first skeleton scene I created, which you can read about in an earlier post. I love making projects for Halloween. Do you? It's too bad there are only 31 days in October... 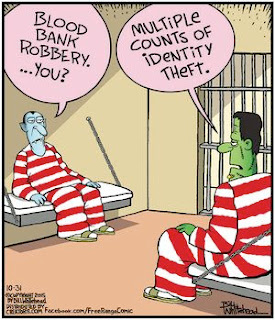 Labels: 31 days of Halloween, Dude I got your back, skeletons
Older Posts Home
Subscribe to: Posts (Atom)