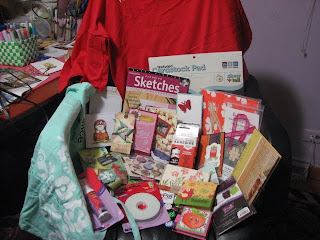 What a blast! I went to CHA-Chicago for the public. This is only the second year I think that they did an expo for us consumers. It was awesome! I was there for 8 hours, and didn't quite get to all the booths. I took two workshops, won prizes, received goody bags, made about twelve make&takes, all free, and shopped to my heart's content (not really, my budget was very limited). I had fun.
What you see pictured here are most but not all the things I made and won. There's more, but my chair wasn't big enough. All free, oh, except for the red t-shirt, I bought that one for $10. But look at my loot!!
I usaed flower soft for the first time, and now I'm hooked. I bought from Paper Trey for the first time (waited ten minutes to just get inside their booth, line was so long), and fell off my Paper-holic wagon big time. I used grunge paper and made a bracelet, copics and made a post-it notebook, stopped off at JoAnn's and Michael's and Archivers, as well as a score of other booths.
My workshops were card-making ones from Slice and Post-It/3M. I decided I didn't want to buy a Slice, then won the raffle prize of a special Music Cartridge! We also received a Seasons cartridge as we walked out! I made six cards there.
We all received adhesives from 3M, foam tape, glue and double-sided glue runners. They have new scrapbooking paper that is all post-it on the back, so it's repositionable forever (expensive, though, as all post-it products are). I made three layout pages there, and won a cardstock stack.
They were giving away Gypsies, Cricuts, sewing machines, etc. I didn't win any big prizes, but had lots of fun trying!! My admission is for two days, but I'm not going today. Maybe if a friend were going with, I'd do it, but I went solo yesterday.
So I'm skipping the craft supershow in St. Charles this year. CHA is enough for me, until 2011.
Posted by Pat at 1:36 PM No comments: 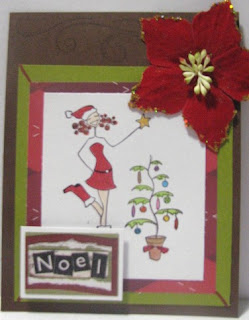 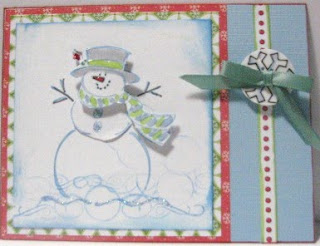 Maybe it's the thought of winter and Chrsitmas that makes a person think cooler thoughts. Only when I get done with my cold weather cards, I seem to have worked up a sweat and the thermometer hasn't budged! But I do have a nice stack of cards to use this holiday season.
Posted by Pat at 7:18 PM 1 comment: 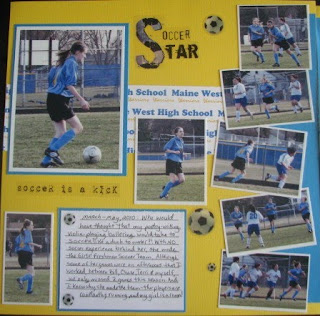 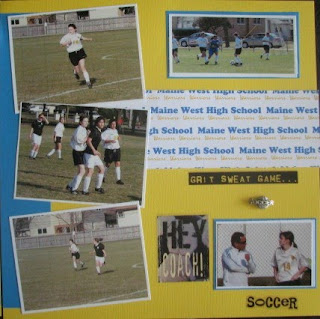 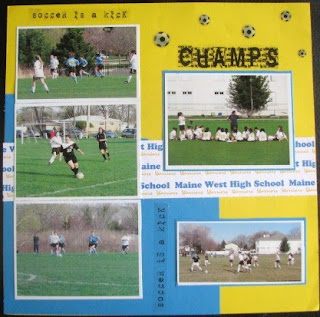 After enjoying an evening out on Friday, we spent a dangerous, anxiety-ridden car ride from the southwestern suburbs of Chicago, to the northeast suburbs, a ride that should have taken 1 hour but lasted two. We rode out hard rain coming at us sideways, lightning bolts as thick as your arm and practically on top of us, and visibility no farther than the next car. We stopped on the side of the road twice, once before and once on the expressway. It was tense, and we felt we had been driving with storm chasers, but we finally made it home around midnight!
The next day I made the boys move furniture and my living room now has a new look to it. It is also super clean, and I even made room for my finished scrapbooks, so people can pull them out to view them.
Today was spent cleaning other rooms, especially my craft room. I'm goping to the Craft Super Show in Rosemont on Friday, and wanted to see what supplies I might be low on. I managed to do some pages and make a card in my "spare" time. LOL
This week is the last of the summer work hours, so after this, no more free Fridays.
Posted by Pat at 8:10 PM No comments: 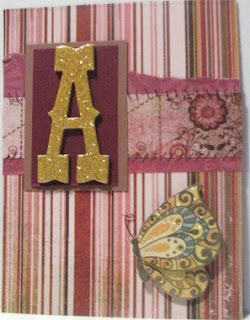 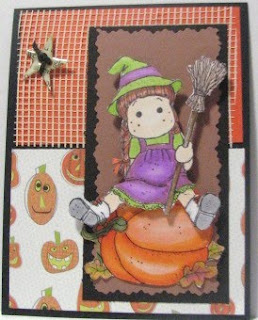 I signed up to make a bunch of cards at Scrapbook Place Yahoo Group. Above are a couple of them. The Halloween cards feature sitting tilda with broom, as well as a Magnolia pumpkin. I colored her with Copics, popped her with dimensional dots, and embellished the cards with some magic mesh and a Halloween button.
For the monogram card, I used glittered Twinkle Type Alphas by K & Co, Basic Grey patterned papers, and 3D butterfly stickers.
If you want inspiration, challenge and plenty of games and paper crafts, let me know and I'll hook you up to Scrapbook Place Yahoo Group. They're a friendly bunch of scrappers and card makers waiting to meet you!
Posted by Pat at 3:43 PM 1 comment:

Where do you get your Inspiration? 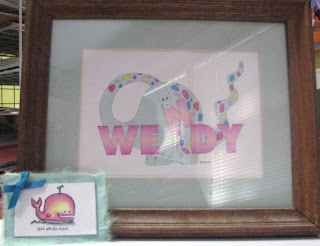 I found mine hanging up over my daughter's bedroom door. I am in a swap with ATCs and couldn't get a handle on the design, until I happened to glance up and see this picture. I loved the colors, so I took it down and put it on my craft table and started pulling out papers and images and ribbons. I ended up with 6 ATCs that can be put on card fronts to make cute get well cards for kids.
So, what inspires you?
Posted by Pat at 10:21 AM No comments:

The Other Half of the Paper 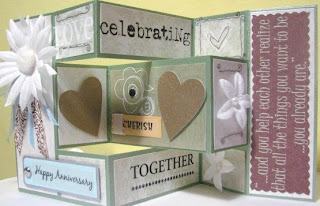 When I made the trifold shutter card for my doctor, I was left with the other half of the card base cardstock. So when I remembered I was invited to my girlfriend's 25th anniversary party, I grabbed up the other half and created their card, using DCWV The Luxury Stack for the dp, and assorted embellies and rubons.
Making these two cards has got me inspired to try my hand on other "nonstandard" cards. I've never made an easel card before...hmmm.
Posted by Pat at 11:23 AM No comments: 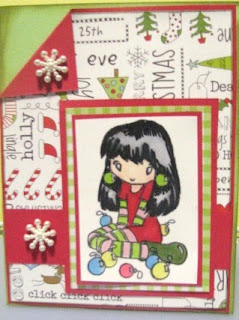 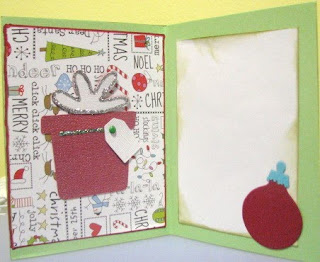 This month's card exchange has a theme of Christmas in July, so I had to use my newest stamp from Funky Kits, "Baubles". The card also qualifies for the Fruit Salad challenge on Scrapbook Place (thank you, Heidi) with its unusual fold, stamped image, inking and dimension requirements.
Having the week off to take care of my health has also allowed me to get back into card making and scrapping, some of which I can show off the next few days here.
Posted by Pat at 7:14 PM No comments:

My Doctor had a Baby 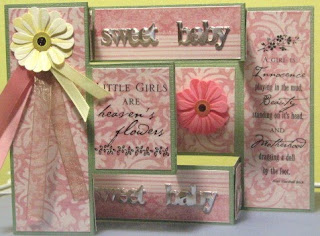 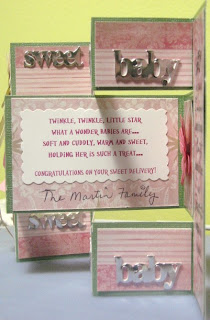 So I gave her a baby scrapbook album filled with baby papers, and made her the card above. I hadn't made shutter tri-fold cards in a while, and had fun making this one. It makes such a pretty presentation. For embellishments, I went to joann's when they were clearancing out a bunch of stickers and embellie packs for pennies, literally! The sweet baby metallics were from there, as well as the sentiment stickers. The flowers were a RAK from one of my scrapping friends, and the paper I used was Bazill for the base, and DCWV's The Luxury Stack for the patterned papers. The Twinkle,twinkle little star quote I made up myself, and used one of the fonts found on Lisa Bearnson's My Favorite Fonts CD.
Posted by Pat at 2:28 PM 1 comment: