It feels like I've been missing from Blogland forever, but there have been lots of changes in my life lately, the most important being the unexpected loss of my mom. It's great to have grown up with good parents, but it's spectacular to become friends with one of them as adults. My mom was one of my best friends, and the grieving process is like falling overboard in the middle of the ocean. Right now the waves keep pulling me under, not every moment, but frequently. Crafting has been like a life raft for me, so even though I haven't shown much on my blog lately, I have lots to show you!!

I know Halloween has come and gone, but here's a peek at one of my favorite spooky projects. I had an old dream catcher that had seen better days. I pulled off the tassels, painted it orange, and gave it a frightful makeover: 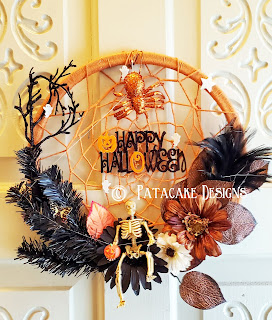 I've also dug into all those thrift shop snags and up cycled a few. This had been a vintage wood footstool, but I updated it to a vintage 70's foot stool, complete with "shag carpeting".: 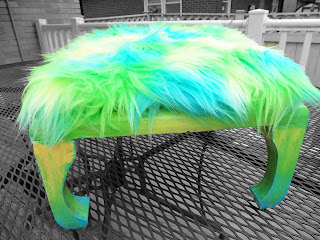 The next one was difficult. But part of the grieving process is to honor the memory of what or whom you lost. I took an antique wall mirror/music box that was my Grandma's and repainted it, replacing the mirror for a photo of y mom and Gram together. This thing is over 60 years old and it still pays music! 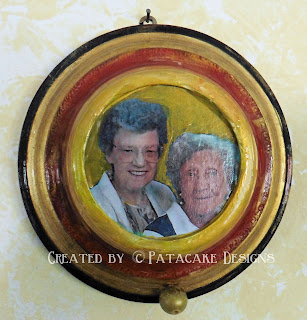 One last upcycle - I love sushi, and I get the best from a local grocery store. We've become friends with the Sushi guy and when I learned his birthday was coming up, I decided to give him my own idea of a trophy. Since knives play the most important part of sushi making, I did a major makeover on a thrift store knife block. He was surprised and loved it, and brought it home to his family to show it off. 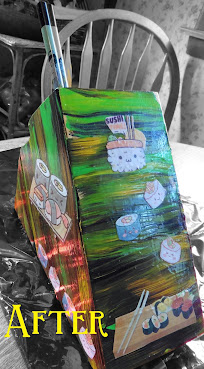 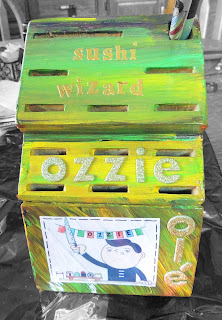 That's it for this post. I just wanted to show you I'm still crafting, still making art, still in the game...
Happy crafting!