Success on the Path of Positivity 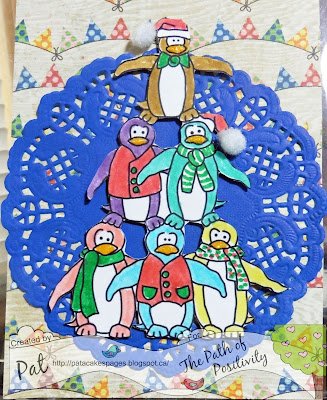 My card today represents the lifetime of hard work and practice it took these holiday penguins to successfully perform their pyramid. But you know what they say, "fall seven times, get up eight". I get it. I have plenty of colored images that were failures, canvases and water colors that went into the trash.
But I haven't stopped crafting and creating art. I'm learning from these failures so that I can build that knowledge and experience into Successes. Note the background paper. It's upside down, which, after looking at it, I decided to keep my mistake because they kind of look like multi-colored trees, thereby turning it into another Success. The image is  from Scribbles Designs and is called  #244 Penguin Pyramid.
So I guess you have figured out by now that the optional theme this month at the Path of Positivity Challenge blog is SUCCESS. Here are the details of the challenge: 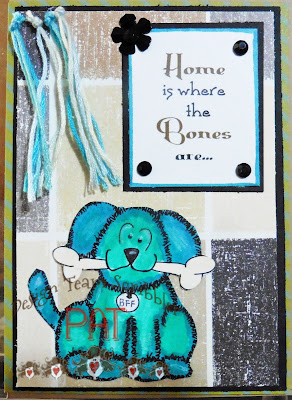 My card today is created with a Scribbles digi called #417 Dog Bone. I have a box of craft supplies that have not yet been organized,and have been pulling out images,papers and embellishments from it and creating cards all week. I was tired of coloring realistic looking animals, so I started coloring dogs and cats crazy colors, like teal and even rainbow. But I found everything I needed for my project here, even the envelope, even though it was a real challenge this month to create a card from the box. That's because Scribbles Designs Challenge Blog has a fresh, entertaining theme for crafters,
Do you have a coin? Don't worry, you can keep it! You will need it to play along by flipping it FIVE times to discover how you will create your project this month for Scribbles. Talk about improvisation!!

Are you ready? Every time you flip the coin, it should land either heads or tails. The chart below has FIVE rows, with both a HEADS and a TAILS column. Your first flip reveals which column you will use in the first row. For example, I rolled TAILS, so I "created a card/project with at least 3 layers. Flip again and find out if you need  to (HEADS) make a rectangle or square card/project or (TAILS) make a shaped card/project. Keep flipping and you have the "recipe" for your project. I highlighted my flips for the card I made:


Don't forget to link your project with Scribbles Designs Challenge Blog for your chance to win a gift certificate to the Scribbles  Store.We would love to see where serendipity led  you to your finished project!! Happy crafting!
Challenges I am Entering:
Posted by Pat at 2:00 PM 1 comment: 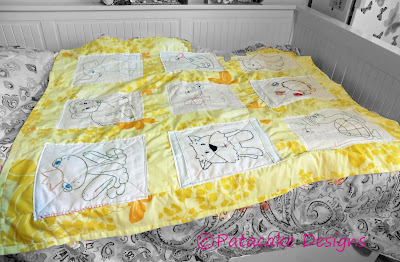 When I was growing up, my sisters and I would spend the weekend with our grandparents every month or so. During those weekends, Gram taught us how to make bread (no bread machines back then). She also taught me to sew on her 1929 Singer sewing machine, as well as crochet and embroider.
When I got married, Gram presented me, the oldest granddaughter and first married, with a handmade baby quilt. Each grandchild eventually received one, as well as her son (who was only  four years older than I. Since he lost his wife before they had  kids, he gave me his). That was over 40 years ago, and my daughter's quilt was looking the worse for wear. Each hand-embroidered panel was disintegrating. 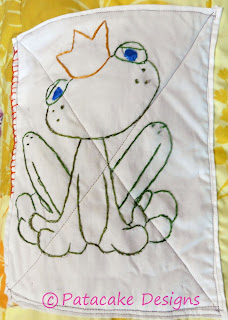 So, throughout this stay-at-home order, among many other projects, I embroidered four panels necessary to replace the shredded ones. I finally finished it!! Instead of tracing pages from a children's coloring book like my Gram did, I used digital images from Tiddly Inks for two of them. 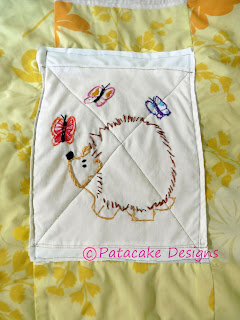 Another panel features a digital image from Scribbles Designs, 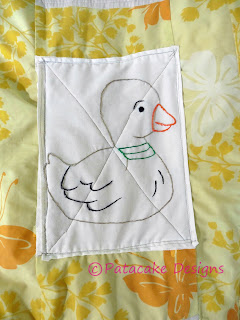 and the last image I can't identify, so if anyone knows the designer, please let me know in the comments. 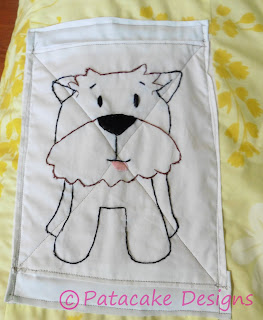 It took me weeks to embroider the animals, as I haven't touched a needle in years. I was going to add the panels to the blanket by hand-stitching, but soon gave up on that. It still took me longer than usual, since my machine was inherited from a friend's mom. It looks like it's from the 1960's, but I got it cleaned and oiled. Of course, I hadn't sewed on a machine longer than I hadn't used a needle. But I persevered,and I think my Gram would be proud. 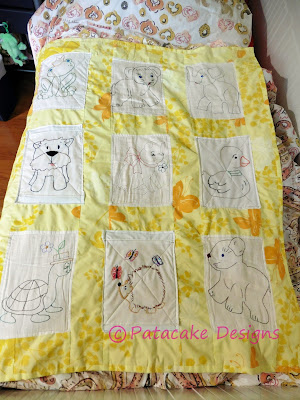 Will It Be Brads, Buttons or Bows?? 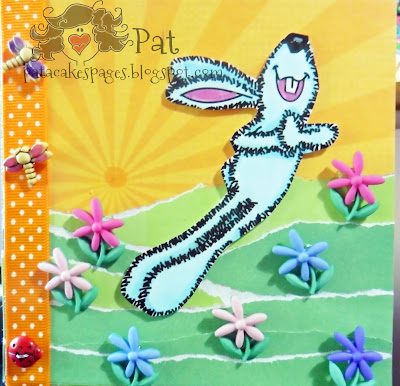 We're finally seeing nice weather, and flowers are starting to show off their colors. Trees are budding, bushes blooming, grass is growing and I am sneezing. Don't you just love seasonal allergies?! But I do so love the colors of late Spring.
Hopefully my card captures some of Spring's fashion show. I used flower buttons floating in a sea of green, while my bunny, an image from Scribbles Designs, is hopping with joy. The digi is called #408 B Bunny Joy, which I colored with my Copics. My background was created with a paper from CTMH and torn pieces of cardstock in two different shades of green.  The sentiment inside is from a rubber stamp and reads:

"May your day bloom
with wonderful surprises"
Today marks the midpoint of Scribbles Designs newest challenge, "Brads, Buttons or Bows". Obviously, I chose buttons, but you can use any or all to use on your project. And it doesn't have to be a card. Use your imagination, try something new, have FUN! Just don't forget to link up your creation with Scribbles Designs Challenge Blog for your chance to win a gift certificate to the Scribbles Store.
Good luck and happy crafting!