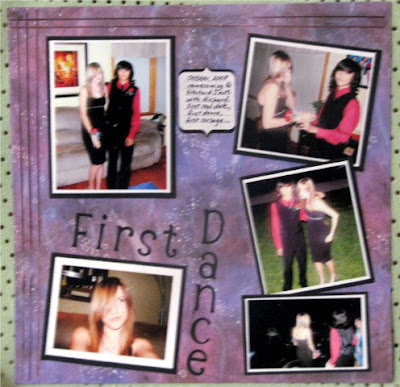 Forgive the fuzziness of this shot, the actual layout is clea rand sharp LOL. I think I need new glasses or a new camera lens!
My daughter is in 8th grade and has a "boyfriend". He's a Freshman, and they'd never gone on a real date. You know how it is with young teens, they're "going out" with someone, yet they've never really "gone anywhere".
Anyway, I had told her that she couldn't go to any high school dances until she was in high school. Then his homecoming dance came up. I said no and two days later He called me to plead his case. He should be a defense attorney. He was eloquent, courteous and in need of a self-confidence booster, as he moved just before school began to a new town (just a few over) and was having a hard time making new friends. So I caved. Problem was, I was going out of state that weekend. Hubby promised to take care of her and take plenty of pics (he got six!) I called her before she got picked up and also the next day. She had a blast! There's hidden journaling behind the pic of her taking her own photo bottom left.
Posted by Pat at 8:12 AM