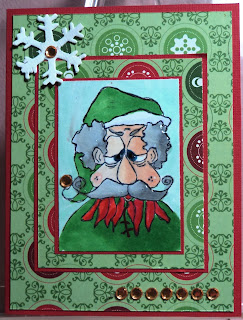 I think I am going to send this card to Santa after Christmas this year.  Looks like he's already in his PJ's and ready to hit the sack after a long hard night.  I had a word with Mrs. Claus and she told me that after Christmas Eve, Santa wasn't willing to pull on one more outfit of red, so his pajamas are anything but..
.
I colored my sleepy Santa, a newly released QKD stamp from Sandra Caldwell called Silly Santa, with my Copic markers and colored his PJ's GREEN so he could rest in peaceful slumber.  I decided to try an "infinity frame" theme for my card, but ended up with only three layers!  Oh well, one person's infinity is not as long as the next person's...

I kept my card clean and simple, with just a white snowflake and some jewels for embellishment.  This card will go through the post office easily with just one stamp, so I might just send a couple of these out to some friends as well as Santa!

I love to play with Sandra's images!  You will too, so go check them out at the QKD Shoppe!!
Posted by Pat at 2:00 AM

I love it. What great colors

I love it. What great colors

Oh that is too cute....got to repost it. Thanks for doing a great job with my design,