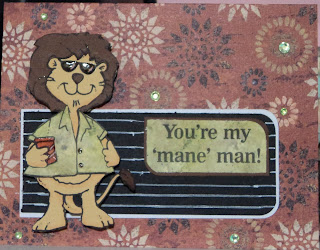 Okay, so no one likes a good pun (nor a bad one, either)! But I did make a nice card, using a new digi image from Hambo Stamps called Digi Lion. I got him free for joining in their weekly challenges, and you can to. Just go to Hambo Hoedown and using ANY Hmabo image, create a card using the challenge guidelines. This challenge called for using Digi Lion, its complementing sentiment and stripes anywhere in the design. I drew my stripes on the black cardstock.
I used DCWV cards from a box and I tried a new technique, at least for me. I've never paper-pieced an image before (I know, cavegirl, right?). But I decided to try it out on Digi Lion here, so I printed my image several times on a creamy yellow textured cardstock (his body), on brown cardstock (his mane and tail) and used a leftover piece of patterned paper for his shirt. I used my Copics for the can in his hands, and for shading of his entire body.
I gave his shades and the can a little shine with Liquid Glass from CTMH and Black Twinkling Start gel pen from AtYou Spica. I printed the sentiment on patterned paper to match his shirt, and then framed it several times with black, white and brown cardstocks. Finally, I drew in the stripes and added a few adehsive-backed gems to finish off the card.
I plan on giving it to my son when we grive down to Missouri to see him graduate from M.P. school in four weeks. I am so proud of him!
Don't forget to go to the Hambo Stamps Hambo Hoedown for your chance to win a prize and get your free digi image!
Posted by Pat at 6:30 PM

Oh whoopie - I'm the first to comment on your MANE MAN! I love that Lion! Great job Pat!

Congrats to your son. One of ours graduated for Ft. Leonard Wood last year--combat engineer. The graduation there was really neat. I like your paper piecing and the shaped sentiment panel.

awww, what a funny card, love the image and the colors... well done! Thanks for playing Hambo Hoedown!

Ooh - I really like the shapes of the sentiment panel, and the shine on the glasses! So fun! Thanks for playing along with us at the Hoedown! :)

Thanks, all. Monica, I cut my sentiment with my paper cutter and then used a corner rounder punch for two opposite ends to make that shape--easy peasy!

Super cute! Thanks for joining in the Hoedown this week!