I just discovered the Never-Ending Card, and thought it would be a perfect project to share during Scrapbook Place's Blog Hop! If you're a hopper, and haven't been directed here from Anna's Blog, then you probably need to start at the beginning, Your Scapbook Place blog.
Now, I’m sure this card has been out there forever, but I just discovered it and wanted to share it with you, just in case you’ve never seen one of these before. The card consists of only four pieces of cardstock, cut at 3”x6”. I used double-sided My Mind’s Eye Bohemia line Bella “Pretty Little Girl” patterned cardstock.
You simply score 1-1/2” from each end while placing the pieces of paper horizontally in front of you. How east is that??? 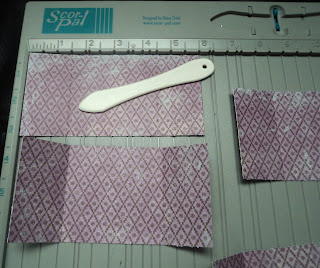 Then, laying the first two pieces side by side horizontally (makes a 6x6 square), place dbl-sided tape in each corner and attach the other two pieces of paper, but laying them vertically on top of your first layer. 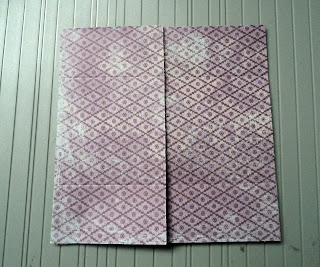 Far be it for me to tell my crafting buds how to embellish their own cards! The real beauty of this card is all in the way it’s folded! Here is a video of folding a card after it's been embellished. Each time you fold it, the card reveals a new "face" with a totally different look:

There are lots of YouTube tutorials out there for any and all to watch and learn. Just type in Never Ending card in the YouTube search bar and prepare to be amazed. I love this new (to me) card, which I hear is from Stampin Up originally!
Now that I have amazed you with my new card, it's time to go on to the next stop on the hop! That would be _______'s. Don't forget to leave some love!!
Btw, if you get stuck and need a blog roll, here it is:
Linda
Annette
Allie
Donna
Lindsy
Anna
Pat

That is so neat! I have to try it out =) Thanks for sharing ~ and thank you for participating! =)

I will have to try that too--never saw one before!! Who knew there was so many ways to make cards--LOL Juanita

Oh Pat - you did it again! Remember that tri-fold card? I'm still doing that one - and now you've inspired me to yet another! Thx gf!

Oh my, that card is awesome!! The video was great too!

Pat love the never ending card and will 'scraplift' that for future make and take card kits. Thanks for the great tut.

HOW AWESOME!
I love this Never Ending Card. Perfect folds and fun pictures. So interesting Gotta Have one!!!!!!!! or two or three LOL
Thanks so much for the Fab Idea.

Great card Pat. Love your tutorial too. You gals are so inspiring.

i'm going to have to get the paper out and rewatch this and try it myself :) thanks for a fun new idea! ps .. i'm a day late and i have to say i love your newest card! but no more snow!! heheh

What an amazing idea Pat! I'm definitely going to have to try that. You're a paper-crafting wizard! Thank you for sharing your faboo idea with us!

I am going to make sure I try this out. I have one of these score boards and just love it but haven't been to their website yet. I heard they have many projects there to try.