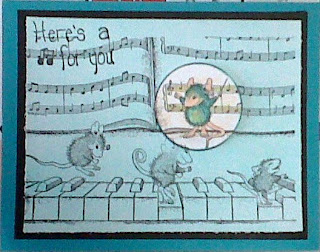 I guess I am addicted to Blogger. When I create, I want to show off my work to the world, at least the part that comes visit me here. But hubby upgraded ALL our computers to IE9, and Blogger HATES IE9!! There are so many things wrong with it, and most of the errors have to do with Google and all it owns. Which meant no posting, no commenting on others' blogs, no challenges. At one point it kicked me off my own Yahoo email and groups, and I had to establish new ones---ugh!!
I want to downgrade to IE8, but hubby says he "fixed" it. He fixed it alright, but I have to go through some major hoops to get onto my fave sites!!
Okay, enough venting, on to the card. LOL
I decided to try a new technique called Spotlighting. i saw a card at the Hambo Hoedown that was similar to the technique, so I brought out my stamped images and, as Pooh would say, "Think, think, think..."
So I thought and this is what i came up with.
I used two of the same stamped images from House Mouse. I love these little mice, dancing on the piano keys, such a joyful feeling it gives me!
So, I colored one image with the following Copics: G00, BG15, E00 & Zig Brushables Apricot.
I used Tattered Angels Glimmer Mist Turquoise on teh second image, after stamping the sentiment "Here's a Note for You" in the top left corner.
I then cut the misted image out and framed it with black cardstock (from WalMart) and placed it on cardstock from Paper Trey.
Next, I had to choose which part of my Copic-colored image I was going to use to spotlight the scene on the finished card. I decided to circle punch the "conductor" of the quartet. I used BG15 and 00 (black) Copics to rim the circle's edge to define it more, and placed it exactly where he was on the original image with dimensional pop dots.
A very simple card, with quite a pop!
Over at Stamping Vacation blog they have several challenges this month. My card is entered into the Animal with Arms challenge, due to end on my birthday! Check them out, they have a lovely gift certificate they're offering to the winner of the challenge!
Posted by Pat at 11:46 AM

I just love your card. What a cute image. Thanks for visiting my blog.