It's Christmas in July at Ike's World Challenge Blog 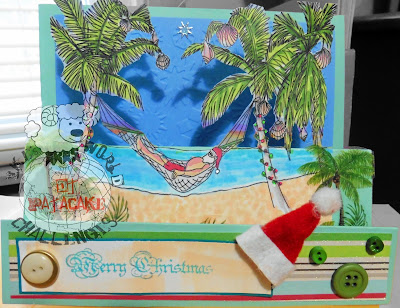 There's a new theme at Ike's World Challenge Blog, and it's sure to bring cooler thoughts during this hot and humid month. It's "Christmas in July," and I found the perfect digi image in Ike's Store for my DT make. I colored up this cutie called Santa's Beach. It was originally a FREEBIE offered on the challenge blog.

It lends itself very well to a step fold card, so I used a holiday-themed embossed piece of cardstock for my background. I popped my fussy-cut image onto the middle "step" , leaving the front to showcase my sentiment.

A funny story about this card: the only reason I created this folded card was because I messed up when I colored the sky. I hated it, so I fussy-cut the sky off. In looking for a nice piece of patterned paper for the background, I came up with the step fold card idea. Another twist was the sentiment. It's actually from a tag I had made previously. The original sentiment was impossible to print, because I ran out of ink!! My first sentiment would have been:

"Now we know why Santa is so pink-cheeked and jolly"
Have you ever created something that started out differently than you planned, whether from a mistake, a missing embellishment or an overactive scissors? Several of my best cards have been through accidents that I covered up or changed a design to conform with what I was left with. I just wanted to know if I was the only one, or if there are more imperfect crafters out there.

Anyway, pull out those holiday papers and embellishments and create a holiday card for Ike's World Challenge Blog. One random winner will receive a gift certificate with which to plunder her store.

Actually, the DT at the 12 Months of Christmas Link-Up are on va-cay this month, so I get to showcase any card I want for my DT make there. I think I'll use this one, my perfectly imperfect step fold card from Ike's Art. See you at Ike's World Challenge Blog, and if you have a mind to it, at 12 Months of Christmas blog as well!

Happy crafting!
Challenges I am Entering:
A Snowflakes Promise - Anything Goes
The Holly & Ivy Christmas Challenge -  Anything Goes
Tuesday Throwdown - The Great Outdoors
Whoopsi Daisy - AG w/optional Christmas in July
Christmas Crafts All Year Round - Must Add Tree (mine happen to be palm trees)
Digi Doodle Studios - Christmas in July
Fabrika Fantasy - Summer (where Santa vacations in the "off-season"
Posted by Pat at 3:30 AM

What a great fun card Pat..I can relate so well as my Christmas too is in the Summer..FABulous.

What a beauty and eye catching details. Beautifully crafted. Thanks for joining in on the fun at Whoopsi Daisy Challenge Blog. We look forward to seeing you again.
Hugs
Berni,DT
cutedaisymay.

Cool card!!! Thanks so much for participating in our CHRISTMAS CRAFTS ALL YEAR ‘ROUND challenge. Hope you participate in our next challenge!! Have a happy crafty day!!!
Deanne at A Little Bit O’ Paper