A day at the Beach 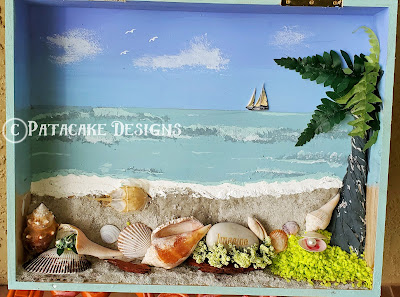 I decided to try my hand at another shadow box,and surprise, surprise, it isn't a Halloween or Christmas one. After spending a week with my son and his family in Florida last January, I was inspired to create a beach-themed shadow box. 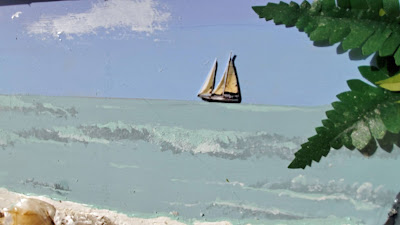 I first painted a glass-covered shadow box a warm sea green, inside and out. Instead of using images or a poster, I painted the background with acrylic paints. It was my first attempt at painting waves, and I think I did a band-up job. I used a photo of a sailboat, cutting its shape out about 4 times to give it dimension (out of dimensional tape). With the sky and the sea done, I used a mix of sand and white glue to create the beach, both on the back and bottom of the box.

Then the real fun began. I had a collection of seashells, some aquarium gravel and bits and pieces of leaves and flowers.

The palm tree is made out of a piece of paper grocery bag that I twisted and then painted before placing  in one corner. The palms are from a dollar store bunch of greenery. 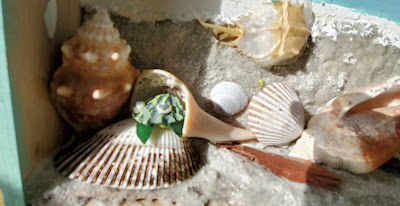 I used shells to create a small sea creature.  I was going for crab, but he looks more like a shy turtle.  I lucked out on finding a skeleton of a crab, pictured above the shells at the water line.

On the other side, I made a small oyster with a pearl hiding inside. adding flowers and an engraved polished stone. 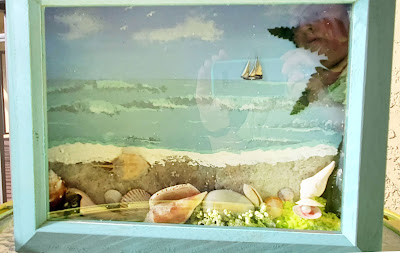 Here's the finished shadow box with the glass cover closed. I'm very happy with it, and sent it down to my daughter-in-law for a keepsake of  my visit.

This is a beautiful shadow box, love the painting & the placement of all beach themed pieces.
Thank you for joining us on Bleeding Art Challenges.
Good luck!
Jane .. Bleeding Art Design Team