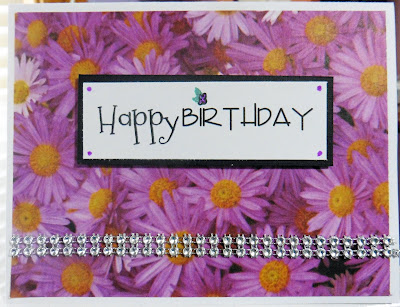 Today starts a new challenge at  Scribbles Designs Challenge Blog. Since FLOWERS is the theme, and FLOWERS seem to be popping up all over the place, I decided to create a POP-UP card. I used a piece of leftover patterned paper that really emphasizes the theme (you think?) to start with.
I decided that the paper was so busy that the front would just have a simple sentiment, and here's a twist. I need new glasses, so when I chose the sentiment, I thought it said HAppy birthday. But it actually said HOppy birthday! Well, that wouldn't do on my card, so I drew a small line to change the "o" to an "a" and then added a very small bloom above the "i" in birthday. Since this card is a DT make for Sandy Sommerfield of Scribbles Designs, I emailed her with the situation and got her permission to do this. 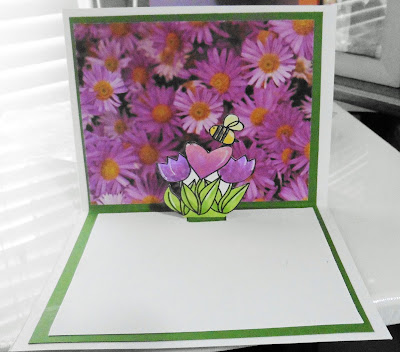 The most difficult part of the card was the inside. Not having a template, I had to create my own. Three pieces of paper later, I nailed it. I covered the top half with the same patterned paper, and the bottom half with white cardstock.
I also used another Scribbles Designs' image called Heart Tulips. This was the image I popped up on the inside of the card. I colored it with my trusty Copics and I had a pop-up  card! 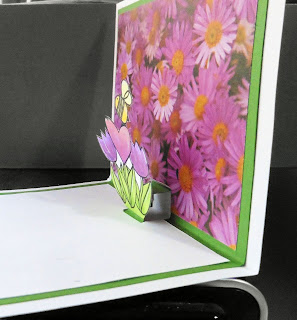 Do you have flower images or papers or embellishments lying around, just waiting to be used for a project? Why not follow the theme and show Scribbles Designs your take on the it? While the theme is Anything Goes with the option of Flowers, crafters using Flowers get a chance to "hang their projects" in the "Standout Scribblers Hall of Fame."
Posted by Pat at 2:00 PM