It's That Old Devil Moon...

Here's a card I made for Valentine's Day, using Queen Kat Designs "Fae of Hearts" stamp by Joanna Bromley.  As I colored her, I realized that I had been humming the song "Old Devil Moon" from Finian's Rainbow, so I borrowed a verse from the song for my inside sentiment: 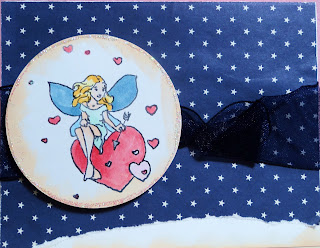 Just when I think, I'm
Free as a dove.
Old devil moon,
Deep in your eyes,
Blinds me with love.
My first major purchase when I started working as a teen was to buy two tickets to the Arie Crown Theater in downtown Chicago for my parents to go see the live musical, Finian's Rainbow.  I was so proud of myself for getting such a great present, and knew my parents would enjoy their evening.

It wasn't until years and years later that I found out their seats were so high up and so far away from the stage that the music and voices reached them about two seconds after the actors could be seen mouthing the words!  So much for getting the cheap seats!!! I have it on DVD now, and still like the story line and the music.  Who wouldn't like to go to "Glocca Morra" or find a pot of gold to make a wish upon?

Such a sweet card. I loved your story too. I have never heard of Finian's Rainbow. I'll be looking it up!

How perfect is that background paper? This is a very sweet card!