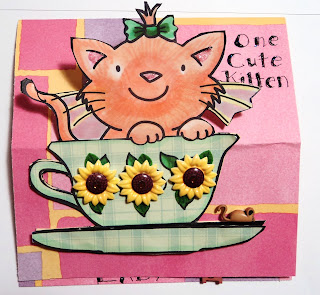 Nothing says Spring like a new kitten.  And nothing says "It's time to add onto your digi image collection like a new release from Squigglefly!!  Here's Teacup Kitty digi image from artist Louise Gardner.  Isn't that kitty so sweet?  Don't you just want to take her up in your hands and put her up against your cheek and let all your worries just melt, along with your heart?! 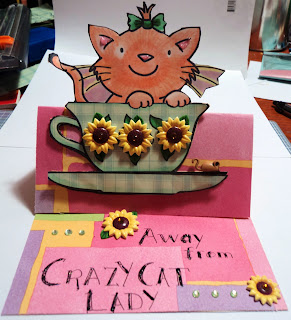 Well, the inside of my easel card says it all!

So, it's no little kitties for me, which is okay for my family, as half of them are allergic to cats!  I have to feed my kitty craving by coloring Squigglefly kitties and making cards.

You can get Teacup Kitty and other new releases from Squigglefly Stamps.  Want to win a free digi image?  Try the Squigglefly Challenge Blog.  This week's challenge is to make a card using a Squigglefly image with a SPRING theme!

p.s. (Did you notice my kitty's favorite toy is teetering on the edge of the teacup? Be careful, little mousie, or you'll be my kitty's lunch).

CHOCOLATE BLOG HOP CANDY WINNER:
Random generator has chosen commenter number nine.  That's Holly!  Holly, email me your mail addy and I will send you the Housemouse Chipboard Album I made for the Hop, and Congrats!!!

Don't forget that I have BLOG CANDY for one random person.  Check out the March 1 blog post for details!!  My card is green, and not just because of the pretty green bow atop my kitty's head.  The card base was made from a legal-sized manila folder that the office couldn't use anymore.  The manila is nice and strudy, especially for irregularly folded cards, like this easel card.  Show me your "going green" project!!
Posted by Pat at 6:00 AM

Ahh, what a sweet image! Love your card, very clever to make an easel card, love it!

Very sweet card. Yes, the kitty does speak spring to me. I love the mouse too. Those flowers around the cup are very pretty as well. Great job!

Pat what a darling little card and your sentiment is so funny! I love the flowers you added to the tea cup!